February 6, 2016 in B Reviews, Reviews, Sariah Wilson, Sweet Romance, YA

REVIEW: The Ugly Stepsister Strikes Back by Sariah Wilson 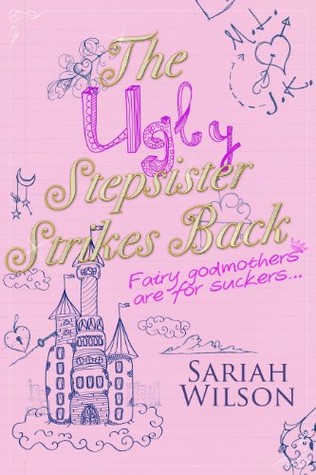 Everyone knows how all those fairy tales go. The princess gets beautiful, nabs her prince, falls instantly in love, lives happily ever after and leaves her evil stepsisters in the dust.

But what happens when you’re the ugly stepsister and your obnoxiously perfect—read pretty, smart, and, worst of all, sickeningly nice—stepsister is dating the charming, tall, devastatingly handsome guy you’ve had a thing for since you were nine years old?

Quirky, artistic and snarky Mattie Lowe does not lead a charmed life. Her mother is constantly belittling her on Skype. Mercedes, the school mean girl, has made it her personal mission to torment Mattie. But worst of all? Her stepsister Ella is the most beautiful, popular girl in school and is dating Mattie’s secret longtime crush, Jake Kingston.

Tired of being left out and done with waiting for her own stupid fairy godmother to show up, Mattie decides to change her life. She’ll start by running for senior class president against wildly popular Jake.

Ella can keep her Prince Annoying. Mattie’s going to rule the school.

And no one, not even a cute and suddenly flirty Jake, is going to stop her.

“I sighed, because that’s what unrequited love made you do. Sigh with self-pity.”

This was really cute. I never thought I could enjoy YA again but this book made a liar out of me. This a quick, light, and easy to read. Very funny. But very YA. Yup. Shocker, right?

The Ugly Stepsister Strikes Back, as the title suggest is Cinderella flipped on its head because instead of Cinderella being the heroine, it’s actually the ugly step sister who is. Mattie Lowe is your quintessential, manga-loving, snarky, awkward high school girl who never fit in anywhere. Her awkwardness is confounded by the presence of her perfectly awesome step-sister Ella who can do no wrong. At first, I thought this was going to be about sister rivalry considering that Ella’s boyfriend happens to be the only boy that Mattie has ever loved. But it wasn’t that kind of story, it was so much better.

I loved Mattie. She’s far from being a perfect heroine. She’s a teenager, so she can be totally selfish, dramatic and self-absorb but her heart is in the right place. Her point of view is a hoot to read. The author totally nailed the insecure but snarky teenager voice.

“The awkwardness between us was so tangible it was like we had another person hanging out with us. Maybe I should ask Awkward if it wanted to go to the masquerade ball with me since lately, we seemed to be spending so much time together.”

Sure, this was a bit predictable, in a John Hughes movie kind of way, but it’s still funny and cute and totally perfect for the mood I was in. I liked the coming of age angle and the romance was totally sweet. And clean. Very clean. Nothing graphic which made this book totally safe to recommend to actual teenagers, which I’m totally not but heck yeah, I still enjoyed it. I’m babbling, but you guys know what I mean.

“There were no words to describe what that level of hope and excitement feels like. Which made me finally understand why they lived happily ever after in those fairytales. Because there was a lot of happy to be had with a boy who loved you and kissed you like nothing else in the world mattered.”

Review: Invisible Ink by Elisabeth Joye
Review: More Than Enough (More Than Series #5) by Jay McLean
ARC Review: This Heart of Mine by Brenda Novak