ARC Review: The Sun and Moon by Leslie McAdam 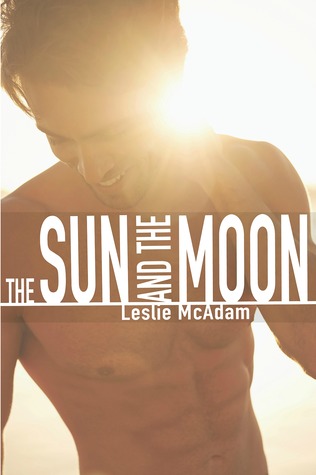 She follows all the rules.

He’s going to teach her how to break them.

After a heartbreaking tragedy, successful attorney Amelia Crowley has numbed herself to the pleasures of life, clinging to a specific set of rules, finding strength in order and organization. When she meets easy going surfer Ryan Fielding, that organized life is turned upside down by a sea of washboard abs and sun-kissed hair.

Sexy and charismatic, Ryan looks for pleasure however he can find it in an effort to silence his own inner demons. Until Amelia crashed into his life the only thing he chased was the next wave. Refusing to break their connection and determined to break through her carefully crafted walls, Ryan sets out to throw out every rule in her book and show Amelia that pleasure can’t be planned.

Can Amelia let Ryan take the lead or will she cling to her rules and wipe out their chance at love?

Before I go and share  my feelings for this book, I have to give props and kudos to Leslie McAdam for writing about depression in the most honest and authentic way possible. It wasn’t overly dramatized or trivialized. It was a sober portrayal but not devoid of humor. There’s an optimistic tone to the way the author wrote Amelia’s condition into the narrative, and the result was so well done.

The Sun and the Romance opens with Amelia in bed with an accountant, who she has been dating for quite a while, and realizing that she’s not into the act and she’s not into him at all but she pretends to anyway. Right there and then, readers are informed that Amelia suffers from depression and has been under medication because of it, which she blames for her lack of, um, enthusiasm.

Her thoughts during this time were hilarious. It was hilarious because I’m pretty sure most of us have done this or had been in this awkward situation before.

What’s on TV later?
One of the channels was having a Harry Potter marathon.
I wish I’d gone to Hogwarts instead of law school.
Wait. Focus. Sex. We’re having sex.

Later on, we find out that Amelia has Rules that she lived by. The Rules were a product of her own upbringing, and the Rules were ridiculous. It would have been so easy to get frustrated with her because of her Rules but she was so self-aware and open about how pathetic and how wrong she could be that I found myself relating to her character.

The story got even more interesting when Amelia met Ryan. Ryan is the exact opposite of Amelia. While Amelia is closed off to pleasure, Ryan glories in it. He pushes at her boundaries and as they get to know more about each other, Amelia becomes more and more comfortable in her own skin.

Don’t get me wrong. Yes, Ryan helped Amelia break down her self-imposed rules but this book isn’t just about a woman finding the “one” to make her let go. Before meeting Ryan and deciding on a relationship with him, Amelia was already on the path to self-realization. Ryan was just the catalyst.

The romance was excellent and the characters are relatable. The writing was easy and very readable albeit a bit choppy sometimes but it somehow fits within the context of Amelia’s POV, so I really can’t complain. The Sun and the Moon is told entirely from Amelia’s POV with a bit of a bonus Ryan POV at the end. I wish I had Ryan’s POV too. While I did get to learn a lot about him, I can’t say that I really knew his character. It made him too perfect and too godlike in eyes.

But like I said, this was primarily Amelia’s journey. I loved the ending, not just because it’s HEA but again, Ms. McAdam didn’t shy away from giving us the real deal about coping with depression. Amelia didn’t get miraculously healed from it, which I really appreciate.

I’d definitely recommend this one. Looking forward to reading more from this author. I’m hoping Amelia’s boss gets a book of his own. fingers crossed