ARC Review: My Soul To Keep by Kennedy Ryan 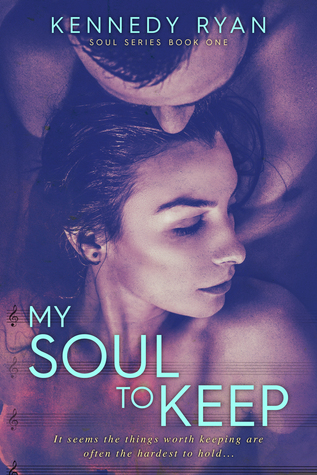 I had two things in life that mattered. My mother and my music.
Mama was taken from me too soon, and now music is all I have left. It’s the thing that’s pushed me right out of backwoods Georgia into Los Angeles, where the line between fantasy and reality shimmers and blurs. I’m finally making my way, making my mark. I can’t afford to fall for one of music’s brightest stars. Not now. Music is all I have left, and I’m holding on tight with both hands. I won’t let go, not even for Rhyson Gray.

I had one thing in my life that mattered – music. The only constant, it’s taken me to heights most people only dream about; a gift dropped in my lap at birth. I thought it was enough. I thought it was everything until I met Kai. Now she’s all I think about, like a song I can’t get out of my head. If I have to chase her, if I have to give up everything – I will. And once she’s mine, I won’t let go.

I spent the entire weekend reading this gem. Kai Pearson is a struggling dancer-singer waiting for her shot at performing. She moved from Georgia to LA after her mother died to pursue her dreams. Like many struggling out of work actors and singers, Kai works as a waitress, a teacher and assistant to a vocal coach in LA. This is where she meets Rhyson Gray. Rhyson is a piano prodigy turned rockstar. He’s been there and done that many times over and he’s looking for something more. When he meets Kai, he feels an instant connection with her. But she’s having none of it despite feeling the same way about him.

So they begin a friends-who-wants-to-bang-each-other-but-won’t-because-of-reasons relationship.

Yeah. Like that ever works out well for everyone.

It started out slow with a doozy of insta-lust/connect/love whatever, which is a pet peeve of mine. I almost gave up on it because I wasn’t connecting with the Kai, and Rhyson was much too controlling and stalkerish for my taste.

But then things started coming around for me at about 40% or so. I understood why Kai was so reluctant to let anyone in. The author was able to show me that yes, her concerns about being in a relationship with Rhyson is valid and true. Suddenly, the book just took off and I could not put it down.

Oh my gosh. Things start to happen as Kennedy Ryan was slowly building the pieces of the story which at first I didn’t quite grasp until it all started coming together and bingo! Puzzle pieces fall together beautifully: the conflict, the angst, the family drama…everything! The story just took flight as Kai struggles to keep her identity and not be overwhelmed by Rhyson’s will. And Rhyson is a force. I do believe he loves Kai but he seriously has no boundaries whatsoever. Some of the things he did undermined their relationship in the worst possible way.

Unfortunately, every single doubts and reservation that Kai had about Rhyson all came true and it hurts reading about it. The angst especially in the second half was phenomenal.

Unfortunately, there was no relief yet for my poor, bruised heart because I have to wait for March 2016 to get the conclusion of Kai and Rhyson’s story.