Release Blitz: The Allure of Dean Harper by R.S. Grey 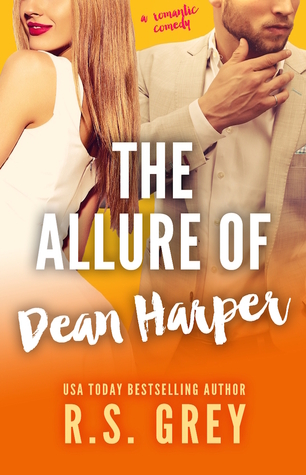 Good morning my dear, naive friend,
I hope you’re enjoying a breakfast of regret and sorrow.

Because you sent me to work for Dean Harper, aka a control freak in a tailor-made suit. Sure he owns the trendiest restaurants in NYC, but c’mon Jo, his ego makes Kanye West look like the Dalai Lama.

He’s the type of guy that only hears the word “no” when it’s followed by “don’t stop.” Working for Dean Harper would be like selling my soul to the devil…and before you say anything, I don’t care if the devil has punch-you-in-the-gut brown eyes and an ass to match. My soul isn’t for sale.

The Allure of Dean Harper is another fun, enjoyable read. The book follows the adventure of food blogger, restaurant connoisseur Lilly Black. If you remember, Lily is Jo’s best friend. She moves to New York City following in Jo’s footsteps in trying to carve her name onto the city’s highly competitive food/restaurant business. Dean Harper is the quintessential New York bachelor-slash-restaurateur who happens to be Julian LeFray’s best buddy.

The two met and immediately disliked one another. Dean is set in his ways and wants things done according to his wishes. Other people go out of their way to follow Dean except Lily, of course. In fact, she find ways to antagonize Dean by going against his wishes. She’s right most of the time because she’s a genius at what she does. But Dean isn’t easily convinced. Hence, they are both locked in a battle of wills. Both are attracted to each other and want each other but they have too much pride to really relinquish control.

All I can say is that I loved their chemistry and the love-hate relationship between them. It was worth it knowing that despite all the bluster, Dean and Lilly are right for each other. You cannot help but root for them. This book is definitely cute, and a lot of fun to read.