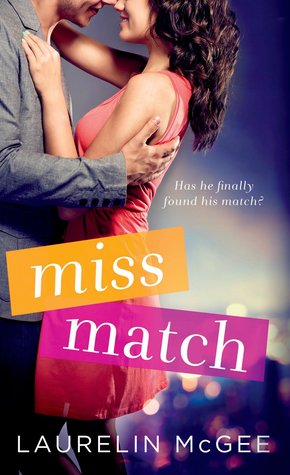 Welcome to the sexy, crazy, wildly unpredictable world of modern matchmaking, where fixing up strangers is part of the job—but falling in love is an occupational hazard…

Blake Donovan is tall, handsome, rich, and successful—so why would a guy like him need a matchmaker? Andrea Dawson has no idea, but a job is a job. After being blackballed from a career in marketing, Andrea agreed to use her unique profiling skills to play matchmaker out of pure desperation. But when she meets her highly eligible—and particular—first client face to face, she wonders what she’s gotten herself into…

Is She His Perfect Match?

Blake knows exactly the kind of woman he’s looking for—and it’s the total opposite of Andrea. Though smart and undeniably sexy, she is simply too headstrong for a man who’s used to being in charge. Still, Blake’s blood pressure rises whenever she’s near him. How can he explain the smoldering attraction that sizzles between them? And how can Andrea deny she’s feeling it, too? Maybe, just maybe, they’ve finally met their match…

The premise reminded me a bit about Match Me If You Can by Susan Elizabeth Phillips. It almost has the same set up: A powerful rich guy hires a matchmaker to find him a wife that he thinks he needs. Of course, as the book progresses, we all know that it’s the matchmaker herself who is the perfect match for our hero. Unfortunately, I didn’t quite love this one as much as I loved Match Me If You Can.

I liked Andrea Dawson. She was fun, quirky, a bit irresponsible and impulsive. I know, I know, but that one particular flaw was something that endeared her to me as a reader as well as her knack for reading people. I especially enjoyed her interaction with her younger and more responsible sister Lacey. Their banter was the best thing in the book for me.

Unfortunately, I can’t say the same for Blake Donovan. I usually like closed off and assholish heroes but Blake didn’t do it for me. I couldn’t relate to his angst. As I’m writing this review, I’m trying to remember what exactly made him act like a douche but I couldn’t remember. The authors did try to make him more sensitive by making him a closet Downton Abbey fan who also likes arcade games, but I never did warm up to him.

Humor plays a big part in the story as well. Miss Match, while funny in parts, didn’t quite live up to that humor part. Don’t get me wrong, like I said, there were some hilarious parts. But some scenes were head-scratchers. Maybe I just missed the joke but it just fell flat to me. The humor was too uneven. Some of the jokes felt off and cringe-worthy. And not funny at all.

Still I was ready to give this 3 stars but the end pissed me off. It’s a personal bias so I know that most readers wouldn’t be bothered with it the same way I was but I’ve come to loathe the whole BIG MISUNDERSTANDING plot device as a final climax/conflict in a book. I could handle it at the beginning where both parties can learn from it and we see them avoid the same trap along the way. But nope. It was towards the end and it annoyed me because flouncing was involved. She flounced and he also flounced. Grrr. I wanted to flounce myself but it was already near the end so I finished it. Like I said, it’s something that I personally just don’t like in my books. I’m sure most readers won’t find any problem with it.

ARC provided by St. Martin’s Press in exchange for an honest review.