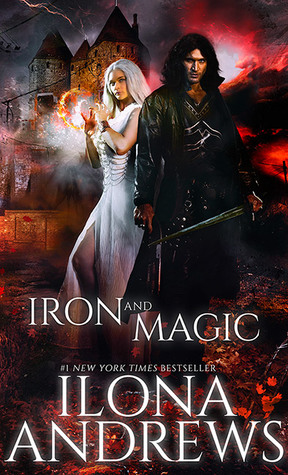 No day is ordinary in a world where Technology and Magic compete for supremacy…But no matter which force is winning, in the apocalypse, a sword will always work.

Hugh d’Ambray, Preceptor of the Iron Dogs, Warlord of the Builder of Towers, served only one man. Now his immortal, nearly omnipotent master has cast him aside. Hugh is a shadow of the warrior he was, but when he learns that the Iron Dogs, soldiers who would follow him anywhere, are being hunted down and murdered, he must make a choice: to fade away or to be the leader he was born to be. Hugh knows he must carve a new place for himself and his people, but they have no money, no shelter, and no food, and the necromancers are coming. Fast.

Elara Harper is a creature who should not exist. Her enemies call her Abomination; her people call her White Lady. Tasked with their protection, she’s trapped between the magical heavyweights about to collide and plunge the state of Kentucky into a war that humans have no power to stop. Desperate to shield her people and their simple way of life, she would accept help from the devil himself—and Hugh d’Ambray might qualify.

Hugh needs a base, Elara needs soldiers. Both are infamous for betraying their allies, so how can they create a believable alliance to meet the challenge of their enemies?

As the prophet says: “It is better to marry than to burn.”

Hugh and Elara may do both.

Ilona Andrews are one of those authors that can’t seem to do no wrong, and they proved that once again with Iron and Magic.

Filled with interesting characters, pulse pounding action, and vivid world-building, Iron and Magic will leave you breathless with excitement. Fast-paced and well plotted with some of the best battle sequences I’ve read in my whole life, Iron and Magic exceeded all my expectations, and then some!

“There is a tried-and-true method of making an alliance appear secure,’’ Lamar said carefully.
Hugh glanced at him. “A union,” Lamar said, as if worried the word would cut his mouth.
‘’What union?”
‘’A civil union, Preceptor.’’
‘’What the hell are you on about?’’
Lamar took a deep breath.
‘’Marriage!’’ Bale yelled out.
Hugh stared at Lamar. ‘’Marriage?’’
‘’Yes.’’
They had to be out of their minds. ‘’Who would be getting married?’’
‘’You.’’

Iron and Magic opens a few months or so after Hugh was exiled. Roland left him, taking away Hugh’s lifeline to his magic and favor. He’s become nothing but a shell of his former self, and a drunk who basically sleeps in his own piss and vomit. Hugh has hit rock bottom. Not only that, his Iron Dogs are being hunted one by one by Nez. It took a group of his loyal centurions to straighten him out long enough to broker a marriage deal with a mysterious group of people called the Departed, who’re looking for someone to defend them against a threat by Nez. And I have to say, I felt some sort of satisfaction watching Hugh hit rock bottom.

It’s not me being mean but if you must know, before I go any further: I didn’t like Hugh in Kate’s books. I legit hated him a few times while reading it. I was unimpressed by his posturing, nor was I amused or happy about his pursuit of Kate. So when Ilona Andrews said they’re giving Hugh, not just a book but a spin-off series, I was hesitant. But in hindsight, after finishing Iron and Magic, I shouldn’t have been because these two authors managed to change my mind.

Did they manage to redeem Hugh? It’s a start. A really, really good start. And in a way, I’m grateful they didn’t make him good GOOD. He’s a gray character, and I think he will always be in some ways so their decision of not make him suddenly noble and good made perfect sense. And it served the story so well.

‘’If it helps, your prospective bride has to be talked into the marriage as well.’’
‘’Perfect. Just perfect.”

However, as much as I enjoyed reading about Hugh’s turn from villainy to heroism, what made–or should I say–who made this book for me was Elara. Elara Harper was vaguely mentioned in Kate Daniels but I couldn’t remember the exact book. I’m quite sure she was vaguely referenced there, if not by name, then certainly by reputation.

Anyway, Elara was the standout character here. She’s mysterious and gave it as got as she got. She could go toe to toe with Hugh with no problem. And she’s not a Kate-type character either. She’s more subtle and she’s hiding a truckload issues and powers I can’t even begin to fathom. We’re given sort of a hint of her abilities in this book but the range of her powers or the depths of her issues, and how she came to be and what she is wasn’t revealed in this book. But based on what I’ve read so far, I can’t wait to see where Ilona Andrews will take this character, because she is a wildcard.

‘’This marriage is in name only.’’
‘’Sweetheart, you couldn’t pay me enough.’’
Pink touched her tan cheeks. ‘’If you betray us, I’ll make you suffer.’’
‘’We haven’t even married yet, and I’m already suffering.’’
‘’We have that in common,’’ she snapped.

Now for the elephant in the room: the romance. If you’re familiar with Ilona Andrews, then you would know that they don’t really write straight up romances despite authoring my favorite OTP of all time. They write Urban Fantasy. That said, they’re giving us one of my fave romance tropes ever and they did it really, really well. Hugh and Elara couldn’t stand to be in the same room together. Elara doesn’t trust Hugh, and vice versa.

And for awhile there, I thought their romance would never get off the ground because it was a slow build. But slowly, Ilona Andrews built up their romance in a way that, again, made sense for both their characters. Hugh will never be that guy who will fall immediately in love with someone and suddenly spout poetry. It’s just not in his DNA. Same with Elara. And I’m totally okay with that. It made their eventual coming together worth it. And boy, was it worth the wait. Hugh and Elara burned up the sheets together. Honestly, I’m still blushing every time I remember their sexy time together. Whew!

‘’We’re newlyweds. If I threw you over my shoulder and dragged you into the woods, that would be overdoing it.’’
The image flashed before her. ‘’Try it. They won’t even find your bones.”
‘’Oh darling, I don’t think you’ll have any trouble finding my bone.”

As much as I enjoyed the romance between Hugh and Elara, my favorite parts of this book were the battles. There were two major battles in Iron and Magic and both were epic, the last battle especially. Vividly written and filled with so many character moments, these scenes were outstanding in every respect. It was tense and brutal. Not to mention, the stakes were sky-high for the characters. Ilona Andrews continue to impress with their battle writing skills. Don’t even get me started on how awesome their world building is with its rules and conditions. I didn’t think there was anything else that they could add to this world but i was wrong. They expanded this world and made it even richer.

Fans of Ilona Andrews will find plenty of things to love about Iron and Magic. Whether or not you were a fan of Hugh D’Ambray or not, this book is a must-read!

I voluntarily reviewed an ARC provided via NetGalley