Review: A Beautiful Kind of Love by Ellie Wade 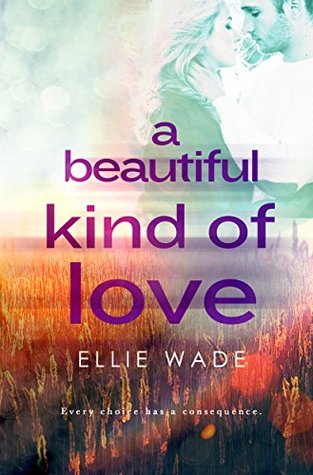 Every choice has a consequence.

I believe in soul mates. Why? Because I have one and his name is Jax Porter.

I have known Jax my whole life and I have loved him with every breath I’ve ever taken. The fact that we were born a mere month apart to mothers that are best friends has made us inseparable since birth.

What we have is so rare, one would think our story would be written, our fate sealed. But, unfortunately that’s not how life works. Life offers us many choices that can turn destiny into chance.

I now find myself heading toward a destination that I could have never imagined and I have to figure out where to go from here.

Will the choices that have been made change our path forever or will fate find its way?

A Beautiful Kind of Love is one of those books that based on the blurb, and the way most of my GR friends loved it, was going to be a sure winner for you. Or so I thought.

Unfortunately, it didn’t quite happen that way. I didn’t hate it all the way through. For one, I was unable to put it down once the story picked up. Two, I liked their friendship. They have history. And it was established early on that Jax and Lilly are soul mates, which made their subsequent decisions all the more unbelievable and contrived.

*WARNING: There will spoiler-rage ahead!

Jax and Lilly have been best friends since forever. Their moms were besties and got pregnant together, so it wasn’t surprising why Jax and Lilly became best friends as well. It was in high school where their relationship changed from purely platonic into something romantic. They were in love and in their heart of hearts, it’s forever.

Until about 45% in. Suddenly, Jax, out of nowhere, just dropped a bomb on Lilly right after having sex with her and telling her he loves her and she’s his soul mate!!

The second half of the book got even more convoluted than the first part with Jax and Lilly trying to outdo each other in the stupidity department. I didn’t get soul reaching angst. More like frustration and rage. If I were to rate this book based on that alone, heck, this is five stars all the way. But I won’t because there were other things that niggled at me.

One. Jax and Lilly were very underdeveloped as characters. If they were then I would have understood their decisions better. They are best friends and they knew each other so well but holy dear lord in heaven, these two had no idea how to communicate. None. It would have been okay if they were a new couple who didn’t have a lot of history together but they were. Their families are close. They live next to each other and somehow they still couldn’t communicate to save their lives — or in this case, their relationship.

Two. The secondary characters were not developed as well. They’re just there to serve as filler and to add even more drama to the story. I’m looking at you Tabitha and Trenton. Jax biggest reason for breaking up with Lilly was that he supposedly couldn’t take the stress stemming from his relationship with his father. The problem is, apart from Jax, inner monologue and a few dialogue with Lilly, we don’t see that in the story. It was all in the background, which is why I didn’t buy Jax’s half-ass reason in the first place.

Three. The timeline or the lack thereof. Yeah, I may just be nitpicking here but it bothered me. The story started from what I presumed as the past since that’s how our brain works. Unless we’re reading a historical novel or a novel set on a certain time period, our brain automatically puts things in order. The book opened while Jax and Lilly are both 12 years old and you’d read references to iPods and Kindles and movies. But then as the book moves along to what I assumed to be the present, which made everything weird because it’s like the technology is the same. And I don’t want to be a nitpicky bitch but it threw me off and took me out of the story, to be honest.

Four. That last part was just…

Again, that was the stupidest thing ever. It didn’t make a lot of sense. And oh, the fact that Jax didn’t even fight for her when the first time they broke up, he told Lilly to basically hang in there and still act as though nothing is wrong,  made me dislike him even more. And Lilly…I mean, come on, I get that he’s your best friend but you have got to be kidding me with the doormat act.

But I reserve the bulk of my ire and ragey feels for Jax.

So I’m sorry my GR friends who loved this book. I wish I could love this as much as you guys did but no dice. The only reason I’m even entertaining the thought of reading book two right now is that I need some answers. And it better not be what I think it is because that would just be another clusterfuck.

Thanks to Lana and Lisa Jayne for the BR.