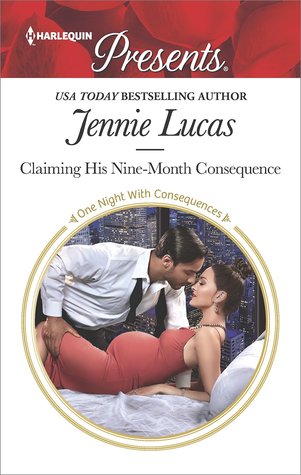 She succumbed to his sinful seduction…

It’s the last thing he wanted, but Greek billionaire Ares Kourakis is going to be a father. He’ll do his duty and keep pregnant Ruby by his side—he’ll even marry her.

But when all he can offer is intense passion and a vast fortune, will that be enough to get idealistic Ruby down the aisle?

I liked the premise of the book. The down on her luck, small town girl meets the obnoxiously, rich, cynical boy is a tale as old as Harlequin Presents has been around. And it worked. For the most part.

I liked the heroine, Ruby. She’s not in the best circumstances of her life and she’s struggling financially but she has a plan and an ambition. The hero was okay, too. Despite him being spoiled and stubbornly refusing to acknowledge his feelings for the heroine, Ares was responsible enough to be there for Ruby. He had a lot to unlearn and the Ruby was there to help him.

It was comical watching Ares try to win Ruby only to have his plans fail spectacularly because he kept assuming things about her. But he learned.

My only issue is that some things were just conveniently solved without a hitch. For example, Ruby’s sister became disillusioned with Ruby after she refused to accept help from Ares at first. She doesn’t want to be labeled a gold-digger, you see. Something that her sister has no problem with. They had a row where she said some nasty things to Ruby then abandoned her. Suddenly, Ares offered to give her money for school, etc. and viola! It’s good again.

There are a few more things but I’m not inclined to write them all down because I don’t want to spoil the book. Overall, I liked it despite not being very memorable.

View all my reviews