Review: The Night We Met by Tara Taylor Quinn 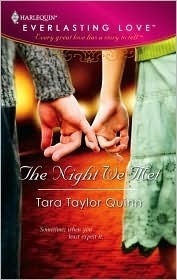 What is it about?

I wasn’t supposed to love Nate Grady, let alone marry him. But we found a love that triumphed over all adversity…just like Jane Eyre, my very favorite heroine.

I was young, bookish, naive…on the verge of entering the convent – and then I met him…. The day I abandoned my old life, the day I agreed to marry him, now seems an eternity ago. But despite everyone’s objections, I fell for Nate. An older, previously married man. My first and only love. My husband.

When I looked into Nate’s eyes on our wedding day, the rest of the world vanished. If I was crazy for doing this, I prayed the craziness would last forever….

Tara Taylor Quinn is a new-to-me author. This is my first book from her (I’m currently reading another one) and it was a real doozy.

Life started the night we met. Everything before this was merely preparation for what was yet to come.

Eliza Crowley was 18 years old and on the verge of entering the convent when she met Nate Grady. The year was 1968. Nate Grady was divorced, and because the Catholic Church doesn’t allow divorce, Eliza’s blossoming relationship with Nate became a point of contention with her family. Despite their objections, Eliza abandoned her dream of being a nun, left the Catholic Church and married Nate.

The Night We Met is the story life together, from the moment they met, when they had kids, the problems they encountered throughout their marriage. It reads like a memoir, and it spans four plus decades. It is told entirely in her POV which starts out with a marker of what’s going on in the general in the world and then goes on to detail what is happening to their life at that moment. It was very unique and the writing style is very engaging.

I was totally invested in Eliza’s character and her relationship with Nate. It wasn’t an easy one. They went through so much — births, deaths, infidelity, business triumphs — the ups and the downs, the ebbs and the flows. It was gut-wrenching and painful to read at times but also satisfying.

Yes, there is lots of romance but I wouldn’t really consider this as romance because it fits more with general women’s fiction. The book doesn’t really go into detail or go very deep in examining the characters’ motivations but it doesn’t mean this was a shallow book. Quite the opposite. Life lessons are dispensed and as a reader, I can’t help but connect with what the characters learned at each moment of their lives.

Another reason why I hesitate to call this romance was because of the ending. It wasn’t a typical HEA but it was very satisfying and it made sense considering the themes explored in this book. This book was really beautifully written. There’s some religious undertones but not too much. Nothing off-putting. Just some general stuff about living a blessed life. I for one found it very comforting.

A word of caution though, for those who are planning to read this. Tissues. Lots and lots of tissues because there will be tears and snot. Lots of them, so be prepared.

ARC Review: Falling Away (Fall Away #3) by Penelope Douglas
Cover Reveal: Maybe In Another Life by Taylor Jenkins Reid
Review: The Game Plan (Game on #3) by Kristen Callihan